before we had wed, i had heard a lot about my husband's love for making pizzas. now i would not deny, my husband is an above average cook. he is GOOD. however, in the eight months of our marriage i did not get a taste of the highly praised pizzas. ever since my husband had the baby pizzas i made as a snack for the guests the other day, he had been insistent on making them for the family. so we chose friday night for my husband's special pizza treat.


after coming back from work, we both went grocery shopping specifically for the pizzas. we picked up pizza bases, capsicum, yellow and red bell peppers. my husband, in his usual funny way asked the vegetable boy "bhaiya pizza mein aur kya kya dal sakta hai" (what all can be used as a topping for the pizza). understanding that my husband has already had his pick of veggies the boy just smiled back in reply. i picked up a box of mushrooms. then we proceeded to the meat shop. i wanted to have chicken seekh but my husband's liking for the red meat finally got us mutton seekh. once we were done, we headed home.

our kitchen instantly turned into my husband's pizzeria. while i started working on the pizza sauce, my husband chose to chop the veggies for the topping himself. i picked up the tomatoes, garlic and seasoning for the sauce. my husband pulled a stool and sat at the kitchen slab  and started his job of skillfully chopping the veggies. he then brought all the veggies together, added salt, pepper, some oregano and a capful of Tabasco for the twist. my tomato sauce was ready in no time. i left it to cool a bit. once my husband was done with the veggies he moved over to the cheese. now generally people choose to grate cheese, but since my husband likes to do things differently he chose to cut the mozzarella in diced chunks. then adding a bit of oregano, he gave them a good shake. 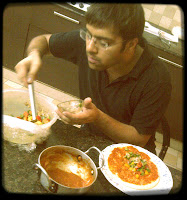 once the raw material was ready. he started working on the final product without letting me touch anything (lol, it was cute). he pricked the pizza bases with a fork like a professional. then he took the sauce, and spread it neatly and evenly on each of the four pizza bases. to provide each pizza with an equal amount of veggies he picked up a bowl and measured the veggies meticulously in them. it was one bowl of veggies per pizza. i was surprised by his attention to detail.

while all this was being done, the seekhs were defrosted and cut into discs. keeping the vegetarians in mind he chose to top just two pizzas with mutton seekh. it looked so tempting. i could not wait to grab a bite.


the oven and the tray was preheated. the moment the pizza was placed onto the tray, it sizzled bringing water to my mouth. the tray was then pushed into the oven as the final step.

after seven to ten minutes the final product came to light, the base all crisp and brown at the edges, the cheese golden brown, the veggies adding colour to the entire picture. my husband cut the pizza into slices, drizzled some oregano and served it hot saying "bon appetit".

after serving us all, the chef finally enjoyed his creation, basking in the glory of all the praises and applause.
Posted by My little Diary at Monday, July 22, 2013