My husband is crazy about cheesy stuff. No by that I do not mean that he is romantically cheesy but he likes food that has loads and loads and loads of cheese (*eyes rolling*). He loves cheese to the extent that he orders for a cheese-burst pizza with some extra cheese on it. He often surfs the net to find out new recipes and generally ends up liking the ones that require a generous helping of cheese. A few days back he shortlisted the traditional macaroni and cheese commonly known as mac & cheese as one of the dishes he would like to try on a weekend.

The other day, when I made a short trip to the supermarket, I spotted the mozzarella cheese sitting in the huge refrigerator. I recalled my husband wishing to have mac & cheese and so I added the small brick of cheese to my cart. My husband returned from work at 7 in the evening and when I made the announcement that mac & cheese was on the dinner menu, I could see the expression on his face which said “dinner time come soon”.

At 7:30 P.M. I started preparing. I opened the packet of macaroni and poured it into a pan of boiling water. While the macaroni was cooking, I prepared the white sauce. I added a few spoons of butter to the pan followed by milk and a few spoons of all purpose flour. When the sauce thickened I added salt and pepper to it. Then came my husband’s favourite ingredient; cheese. I grated a good amount of cheese in the white sauce and gave it all a good stir. I then, drained the macaroni, washed it under cold water and then added it to the sauce. I gave all the ingredients a good mix and cooked it for another two minutes. The macaroni was then poured into a baking dish, topped with shredded cheese and was put in the oven to be baked for a couple of minutes till the cheese melted and looked golden brown.

It was 8:45 P.M. when I served the dinner to my husband; he absolutely loved it and enjoyed every bite. He helped himself with two full servings. My father-in-law who is not a huge fan of recipes that include all purpose flour (maida) liked it too. My fit sis-in-law is not as crazy as her brother about cheese; in fact she dislikes the milky flavour of cheese, so it was obvious for her to not like the dish a lot. My mother-in-law and I also enjoyed the dish. All in all it was a hit!

You can try making this at home too. After all a little cosy cheesy treat once in a while does no harm.

Do the following to have your own bite of mac & cheese:

Boil some water in a pan. Add macaroni to the boiling water. This helps the macaroni to stay apart from sticking together.

On the other side, heat a pan and add butter to it. Once the butter starts melting add milk to it and mix it well.

Now add the all purpose flour to milk and keep stirring the milk while you add the flour to avoid lumps. Once the sauce thickens add salt and pepper to it.

Then, grate a generous amount of cheese in the sauce and mix the sauce well to let the cheese melt and blend with the sauce.

Check the macaroni and if it is soft and cooked drain it and wash it under cold water.

Adding the macaroni to the sauce, give it all a good stir and cook it for another two minutes.

Now pour the macaroni in a baking dish, grate cheese on top and put it in a preheated oven at 180 degree Celsius. Bake it for five minutes, increase the temperature to 220 degrees and bake the dish for another five minutes or till the cheese is golden brown. Take the baking dish out and serve hot. 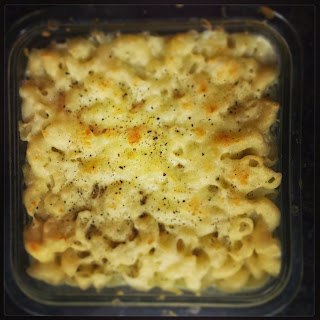 -If lumps form in the sauce, pass it through a sieve. When the lumps get separated add a little liquid sauce to dissolve them through the sieve.

-You can also use a blender to dissolve the lumps but make sure that the sauce has cooled down a bit before you put it in the blender.

-You can add some oregano in the sauce for some added flavour or can sprinkle it on top.