The night before janmashtmi, my family and I were deciding the menu for the next day since it was a holiday. My mother in law suggested chole puri. Now, I have been reading a few food blogs and I did come across the recipe of chole more than once. So, I volunteered to make them the next day for the family. I had never made chole before this in my life.

I had taken a hint from the food blogs but did not take any notes thinking I will remember it all. After all how difficult can it be for someone to make chole...right? But when I woke up the next morning I could not recall all the ingredients.

Due to scarcity of time I failed to go online to take a peek-a-boo at the recipe. I also tried to remember my mom’s recipe. I have seen her cooking the special amritsari chole kulche and a different kind of chole with the puri. Gosh! I then wondered which variation to cook for my new family. I tried to recall her recipes but again was not too sure. I also read the recipe behind the box of chole masala.

I finally started with whatever I could remember and thought of making the changes to the half-remembered recipes till I could cook something decently edible.

Since the chole were already boiled with some salt and a tea bag (for colour) dipped in it, I moved on to the next step of boiling water with black cardamom, cloves, peppercorn, a cinnamon stick and a bay leaf. While the water was boiling for a while, I got the tomatoes and onions chopped. There was no green chilli else I would have chopped that too. I, then, prepared a paste of ginger and garlic (there was no garlic as per the recipe on the chole masala box, but I like the taste of it so made it a part of my recipe).

The kitchen was filled with the fragrance of the spices in the boiling water. I had put a wok on flame, and added ghee to it. Then, I tipped in the chopped onions and added salt, some red chilli powder and some coriander powder to it. When the onions became translucent and golden brown towards the edges, I added the ginger garlic paste. I let it cook for a while and then added the chopped plum tomatoes. After letting this cook for a while, chole masala, and some garam masala were added. I wanted to add dried ground pomegranate seeds but since they were not available in my kitchen I added a spoonful of dried mango powder for a tinge of tanginess. Cooking it for another two minutes, I added some fragrant spiced water so that mixture doesn't burn. Giving it all a good stir, I added the chole. Squishing  a quarter of them to give the dish some consistency, i then added more spiced water leaving just a little for later. To this, a ground mixture of a few raw spices (mentioned below) and a fistful of dried fenugreek leaves were added.

When the chole came to a boil I lowered the flame and kept cooking them. When they became slightly thick in viscosity I added the left over spiced water and let it simmer for another two minutes. They smelt heavenly but I was still uncertain about the taste. So I dipped in the mighty spoon, the contents of which had to please my taste buds. I found the salt to be a little less and there was something else that was missing. I added the salt and not knowing what exactly was missing, I added some more chole masala. Giving the salt and masala another minute to blend in with the dish, I did the final taste check and now they were perfect! I could taste all those flavours that came out so well together in the dish.

I garnished the dish with a few fenugreek leaves, a drizzle of ghee and onion rings. It looked beautiful to me. Now, I was just hoping for a positive report from everyone.

I was proud to present it, especially since it was my first attempt at the dish. When we sat for lunch, everyone loved the chole and enjoyed them with crisp round puris. My endeavour was not wasted. Relishing every bite, my stomach felt satiated and my heart content.

Since i was too worried to get the dish right i could not take a picture at every step. The final picture will be found towards the bottom of this post.

A quick glance at the ingredients 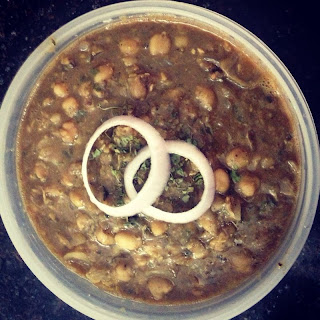