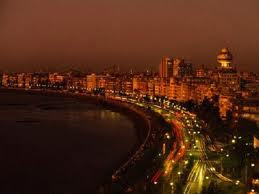 After sharing the train journey experience, a friend suggested me to share the mumbai story, hence this post. we all know mumbai is not just one of the country's metropolitan cities but also the financial hub. it is the city that never sleeps. the strong presence of bollywood is just one element that adds character to this surreal city. the local people and the local food add more depth to the city. marathi conversations can be heard everywhere in the background. the local people have a  unique dialect(note to people from north: i know  you think they are rude, but the truth is it is just way their  language is spoken). as the indian cinema has continued to showcase, it is a city of dreams where people come to achieve and attain new heights. so besides the local population you will find a huge number of people drifting in from various regions of the country for better opportunities.with the sea as its companion, mumbai has a unique feel to it (i cannot compare delhi and mumbai because the comparison won't lead us anywhere. they are distinct and special in their very own ways).
so after all the delay caused by the train, we finally reached mumbai. we got off at the thane station. luckily, both me and my husband has friends in mumbai so figuring out the commute to malad (where my husband's friend stay) was not troublesome. we took a cab to malad, while our friends were already on their way to the birthday party. after an hour and thirty minutes, we reached malad and tried to freshen up as quickly as we could(i was getting irritated since i did not get the time for a blow dry and had to manage my hair on my own). the birthday boy had already arranged for a cab to the venue, so we took a sigh of relief.

the birthday bash was a beach party at gorai beach in mumbai. our friend had rented a beach house. reaching gorai was easy, however i could not say the same for the beach house. it took the cab driver forty five minutes to find the exact location of the house. with our friends continuously making calls we were irked to the edge. after all the "getting lost" insanity we finally reached the beach house. the view, the breeze and the beautifully lit courtyard brought our party spirits back. it felt as if we were in goa. it was a gathering of 35 chirpy people, enjoying the music, food and drinks. we literally danced the night away and were waiting to welcome the morning light(we were actually waiting for the sunrise but the sun rose from the other direction...lol). the moment we saw a little light we walked down to the beach, playing churlishly in water. when we got back to the courtyard everyone was dead tired and we knew it is time to go home. we had hit the sack the moment we reached our respective places and woke up to the barks of the dogs and the screeching autos on the road.

in the evening we planned to attack the street food, and so we headed to the stalls put up opposite mithibai college in juhu. we had the most sumptuous vada pav and not so impressive chinese dosa. then we tried the pav bhaji and the tawa pulao at the amar juice centre(recommended) and it was all so good that we ended up overeating. the pav bhaji was accompanied by juices and milkshakes which were beyond the best. we tried the cocktail juice(mixed fruit), sitafal shake(custard apple shake) and thandai. i had not even heard of custard apple shake before our visit to this place.


at night our friends took us to a place called WTF. the place had a cool, laid back ambience. we enjoyed the outdoors while sipping onto our drinks. the north indian stomachs of these boys took us to this restaurant called dhaba for dinner and so we called it a night with empty bowls of butter chicken and dal makhani on our table.

the next morning our dear friend made us omlettes for breakfast. after lazying around for a while we planned
to visit town(now mumbai is majorly segregated in two parts; the town and the suburbs. malad comes under suburbs). crossing and getting ourselves clicked at the sealinks, we reached town.


i was supposed to meet my friend the same evening, so while he was floundering through the traffic to get to town, we explored the colourful street market selling a variety of things ranging from clothes, accessories to hookahs. after half an hour he picked us up and took us to the terrace restaurant of the sea palace hotel. it was a quiet place,simply done up, with the perfect view of the sea. after having a good time we summed up the evening with my friend  and proceeded further to meet my husband's friends.

we chose to sit at the popular leopold cafe. looking at the desserts on display our sweet tooth was desperately waiting for the snacks to finish. we were a big group so we ordered a mix of desserts. there was caramel custard and tiramisu(my favourite), then a nutty chocolate pastry and not to forget the blueberry cheesecake. we all departed from the cafe in our respective cars deciding to meet at the marine drive, also known as the necklace of mumbai (my friend told me if you see it properly it is not straight road but an arched one). at night with all the lights on it did stand true for the name it has been given. we stopped there for a bit, captured the moment and headed back home.


with one more day in our kitty, we spent it dawdling around the house. at night we had the plan of meeting my husband's cousin and her husband. they are sweethearts since thinking about our convenience they chose to meet us at the inorbit mall which was just ten minutes from where we were staying. for dinner we opted for this restaurant called the maharaja bhog. they had the thali system, that served gujarati/marwari cuisine. my husband who is generally not very fond of the thali sytem and marwari food, surprisingly loved the food at this place. with plans of meeting soon again we parted our ways.

at 12 am we broke a birthday cookie over some coffee calling in my husband's birthday. it was followed by cake, wine and friends getting together.

the same afternoon we boarded the train bidding a final rainy goodbye to mumbai and it's amazing monsoon weather.

p.s: i know there is so much more to see in mumbai which gives us all the more reason to visit it again :)