So…yesterday I got a reason to bake again (though I do not really need one :p..I love it anyway). It was my father-in-law’s (FIL) birthday.

As kids all of us always chose the cake of our choice; chocolate or pineapple, decorated with a doll, a car or the epic pair of bat and ball. Now with the evolution in cake baking, as adults boy don’t shy away from bottles of wine with bikini clad women at the pool and girls love to adorn their piece of cake with Louis Vuittons, pair of heels and the little black dress. The gist of all this is that a birthday cake is all about customization.

So, when it came to baking a cake for the birthday boy, my FIL, I had to keep his liking in mind. His cake should not have cream. He simply hates the cakes which have more cream and less bread. He likes a cake that he can enjoy with his tea later. Then he prefers whole wheat (atta) over all-purpose flour (maida) which is generally the first choice when it comes to baking anything.

I kept these few things in mind and zeroed in on a whole-wheat apple cinnamon cake. Since, it was a Tuesday and our family generally avoids eggs, the cake had to be eggless. I also planned to mix in some goodness of oats and nuts in the cake.

Before making the batter for the cake I had put the oven to preheat at 160 degree Celsius. I started working on the caramel sauce. I had put some sugar, butter and whole milk in a wok and brought it to a bubbly boil. I kept boiling it till the sauce achieved a dripping consistency (like chocolate sauce). I sliced an apple thinly, arranging the slices in a buttered oven tray; I sprinkled some lemon juice and powdered cinnamon on them and poured the caramel sauce over them. I then put the tray in the preheated oven and baked them at 160 degree Celsius for about 15-20 minutes.

While the apples were being done I gathered all the ingredients in one place. I first, whisked ghee, yoghurt and sugar. Adding a bit of milk to it I gave it a good stir. On the other hand I brought the dry ingredients together (oats, whole-wheat flour, all-purpose flour, baking powder, baking soda and a pinch of salt). Then I showered in some ground cinnamon and clove mix and some chopped walnuts and raisins. I mixed it all gently with my hands.

I united the dry mix with the wet one in three parts adding a little warm water with each part of dry mix. Once the two mixtures were united, I dropped in some chopped diced apples into it and folded them gently into the mix. Then I poured the rich looking batter into a buttered mould.
By this time the apples were done, so I took them out and shoved the cake mould into the oven and baked it at 170 degree Celsius for about forty five minutes. My cake looked absolutely rustic with beautiful cracks adorning it, giving it the warm homely feel my FIL loves. I did the prick test by poking a fork in the centre of the cake and it came out clean just as I had expected (*big smile*).

I removed a thin layer from the bottom of the cake and left the remaining on the rack to cool. The crumbling texture tempted me to taste it but I had to wait. I mixed this layer with a few caramelised apple slices and formed small balls from it to be decorated on the cake.

Once the cake cooled down I placed some apple slices in the centre and the apple crumble balls around it. I then dusted the entire cake with some powdered sugar and could not wait to devour it.

Verdict
Everyone including a few guests who had come over to wish my FIL absolutely loved the cake. The fact that it was wholesome and healthy got the cake some extra brownie points.

Now go to the kitchen and get your own scrumptious slice. 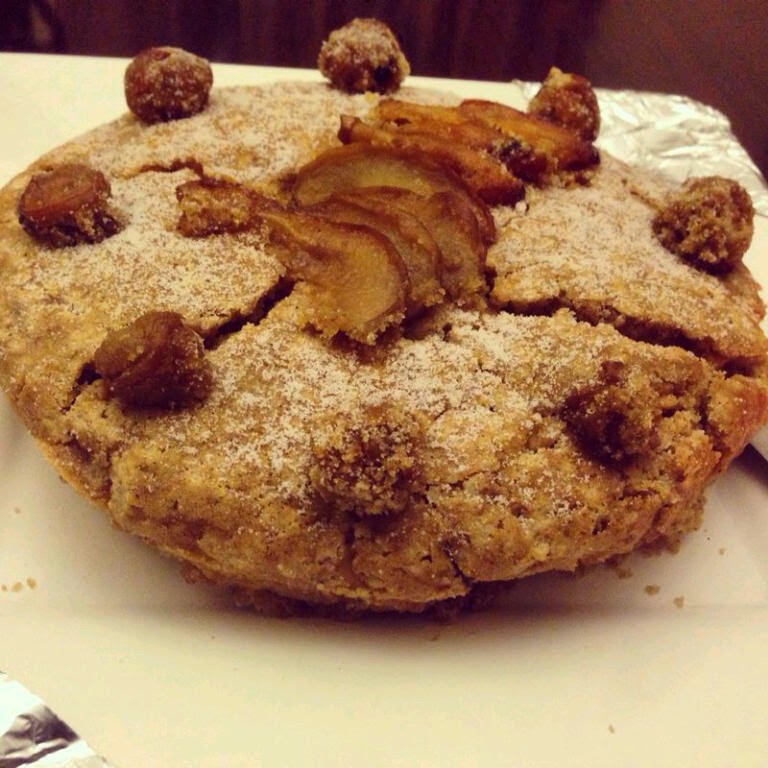 Preheat the oven at 160 degrees Celsius
Cut half an apple in thin slices and keep it aside.
Put sugar, butter and whole milk in a wok and boil it till it comes to a thick dripping consistency like that of sauce.
Butter an oven tray and arrange the apples in it.
Pour over the caramel sauce, sprinkle powdered clove and cinnamon mix over it and a few drops of lemon.
Put the tray in the oven and bake for 20 minutes (or till the slices are soft and tender) at 160 degree Celsius.
Whisk together ghee, yoghurt and sugar. Add milk to it and whisk again.
Bring together the whole wheat flour, all-purpose flour and powdered oats.
Add to it baking powder, baking soda and a pinch of salt.
Add powdered cinnamon-clove mix and mix well.
Drop in the chopped walnuts and raisins and fold them into the dry mix.
Add the dry mix to the wet yoghurt mix in three parts. Add a little warm water with each part and mix well.
Drop the chopped apple dices into the batter and fold them gently.
Pour the batter into a buttered mould.
Take the caramelised apples out of the oven.
Put the cake mould into the oven at 170 degree Celsius for 40-50 minutes.
Take the prick test. Poke a skewer or a toothpick in the centre of the cake. If it comes out clean the cake is done else bake for another few minutes.
Once the cake is out of the mould, remove a thin slice from the bottom of the cake; leave the remaining on a rack to cool.
Mix the thin layer of cake and a few caramelised apples to form small balls.
Place the caramelised apples and the balls on the cake.
Sprinkle some powdered sugar and it is ready to serve.

P.S..: this cake with some hot milk makes a wholesome breakfast and a slice of it with vanilla ice-cream and caramel sauce makes a dessert capable of SOME drool.